Today we launch a new site for the project hosted on Google Code. Almost all the documentation has been moved from the old site and many more has been added. There are still lots to be added but there is enough to get started using the software.

Of course many bugs have been fixed, some new modules added and even a few have been removed but the most exciting feature we have added to this release is a fancy new GUI. 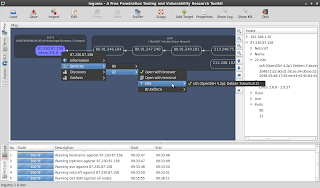 The old Qt GUI has been removed and the new one is PyGtk based, of course the good command line one is still there. This new GUI can't be considered yet stable and not all the modules are actually working properly on it but it's stable enough to be released and to perform most of the basic functionalities.

If the command line one is like a toolbox with high scripting capabilities, the GUI is an attempt to integrate all those tools into a common workflow and add many data visualization aids. The main command line interface should work on the same platforms that before (Linux, Windows and MacOS) but the GUI isn't ready neither tested on other platform that Linux.

Instead of writing here all the new features or a deep description of the new GUI you can go directly to the Console or GUI quick start guides and read about them. The code can be downloaded packed in a tar.gz or from the mercurial repository if you prefer to have your code up to date with all the new features that we will keep adding.

That's all for the moment; thanks to all the people that has supported me during this time and I hope you enjoy using and, hopefully, improving this new release.
Posted by Inguma Blog at 23:05 3 comments: