It has been just one month and we are back with a new release of Bokken, 1.8 is here! This release was meant to be a minor one, with just support for the latest radare2 version but... look at it by yourself:

Bokken started as a UI for pyew and radare2, and we tried hard to maintain both backends in our development. Sadly, pyew moves very slowly and has a different set of skills than radare, so although it's a tough move, we decided to strip down all pyew functionality from Bokken altogether. Given that there's nothing else in the OSS world that fulfills this niche, we will be tied to r2 for a while.  Maybe it's for the best, as the deletion allowed us to clean a lot of old cruft and compatibility code that has been in Bokken for ages.

As always, if a new radare2 version is released then we update Bokken to work with it! Bokken 1.8 works perfectly with (and ONLY with) radare2 0.9.9.

In an effort to better organize the UI we have moved the Sections information to a new tab in the right panels. More work will be done for future releases to make it better. 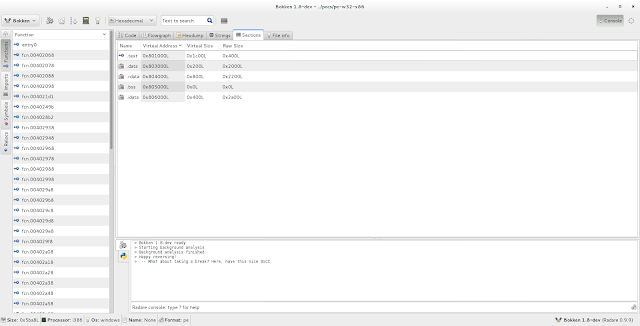 Time has arrived to say goodbye to this useless tab. Farewell!

After moving the Sections panel to the right we decided to use the space for a new and very useful panel: Relocs!

The Strings tab has gone under a complete remake and now it looks better and is easier to use. If you look at the above picture, you may spot an area in the lower section of the UI.  Say goodbye to the Interactive tab and welcome the brand new radare2 console! Way easier to use that the previous one, you can find it as a new bottom panel that can be resized and hidden.

There is more: Python! Either love it or hate it, but we finally added a Python console to Bokken! Located in the new bottom panel it exports Bokken and radare2 objects such as the radare2 RCore instance, RBin and most of the data gathered by Bokken.  Expect some tutorials as we polish that feature. 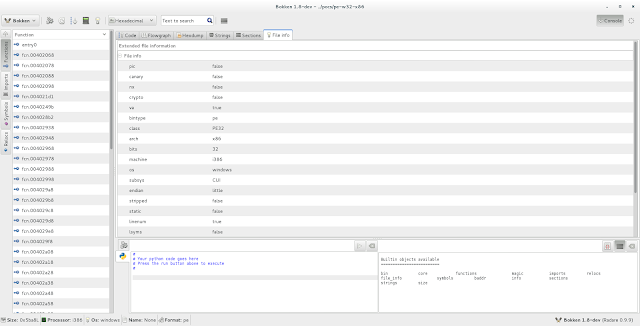 Received a 500 - Internal Server Error when trying to download. Any ETA on when this will be fixed?